Acts 28:1  And when they were escaped, then they knew that the island was called Melita.

Acts 28:2  And the barbarous people shewed us no little kindness: for they kindled a fire, and received us every one, because of the present rain, and because of the cold.

Acts 28:3  And when Paul had gathered a bundle of sticks, and laid them on the fire, there came a viper out of the heat, and fastened on his hand.

Acts 28:4  And when the barbarians saw the venomous beast hang on his hand, they said among themselves, No doubt this man is a murderer, whom, though he hath escaped the sea, yet vengeance suffereth not to live.

Acts 28:5  And he shook off the beast into the fire, and felt no harm.

Acts 28:6  Howbeit they looked when he should have swollen, or fallen down dead suddenly: but after they had looked a great while, and saw no harm come to him, they changed their minds, and said that he was a god. 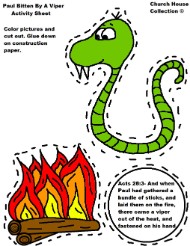 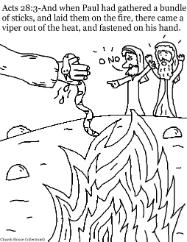 Paul Bitten By A Viper 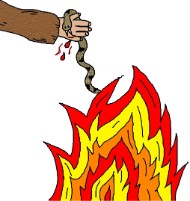 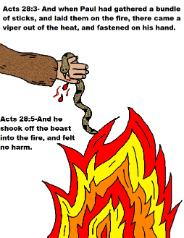 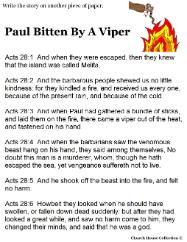