Go to Joseph and the coat of many colors lessons 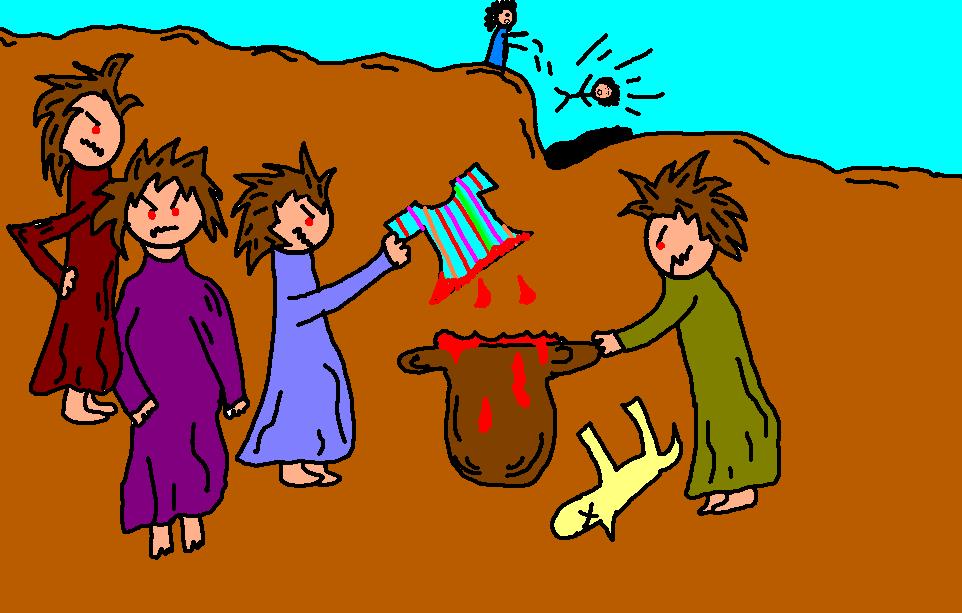 Joseph And His Brothers

18And when they saw him afar off, even before he came near unto them, they conspired against him to slay him.

19And they said one to another, Behold, this dreamer cometh.

20Come now therefore, and let us slay him, and cast him into some pit, and we will say, Some evil beast hath devoured him: and we shall see what will become of his dreams.

21And Reuben heard it, and he delivered him out of their hands; and said, Let us not kill him.

22And Reuben said unto them, Shed no blood, but cast him into this pit that is in the wilderness, and lay no hand upon him; that he might rid him out of their hands, to deliver him to his father again.

23And it came to pass, when Joseph was come unto his brethren, that they stript Joseph out of his coat, his coat of many colours that was on him;

24And they took him, and cast him into a pit: and the pit was empty, there was no water in it.

25And they sat down to eat bread: and they lifted up their eyes and looked, and, behold, a company of Ishmeelites came from Gilead with their camels bearing spicery and balm and myrrh, going to carry it down to Egypt.

26And Judah said unto his brethren, What profit is it if we slay our brother, and conceal his blood?

27Come, and let us sell him to the Ishmeelites, and let not our hand be upon him; for he is our brother and our flesh. And his brethren were content.

28Then there passed by Midianites merchantmen; and they drew and lifted up Joseph out of the pit, and sold Joseph to the Ishmeelites for twenty pieces of silver: and they brought Joseph into Egypt.

29And Reuben returned unto the pit; and, behold, Joseph was not in the pit; and he rent his clothes.

30And he returned unto his brethren, and said, The child is not; and I, whither shall I go?

31And they took Joseph's coat, and killed a kid of the goats, and dipped the coat in the blood;

32And they sent the coat of many colours, and they brought it to their father; and said, This have we found: know now whether it be thy son's coat or no.

33And he knew it, and said, It is my son's coat; an evil beast hath devoured him; Joseph is without doubt rent in pieces.

34And Jacob rent his clothes, and put sackcloth upon his loins, and mourned for his son many days.

35And all his sons and all his daughters rose up to comfort him; but he refused to be comforted; and he said, For I will go down into the grave unto my son mourning. Thus his father wept for him.

36And the Midianites sold him into Egypt unto Potiphar, an officer of Pharaoh's, and captain of the guard.

Go to Joseph's Coat of Many Colors Lessons