Boy Jesus Teaches In The Temple

Luke 2:42  And when he was twelve years old, they went up to Jerusalem after the custom of the feast.Luke 2:43  And when they had fulfilled the days, as they returned, the child Jesus tarried behind in Jerusalem; and Joseph and his mother knew not of it.Luke 2:44  But they, supposing him to have been in the company, went a day's journey; and they sought him among their kinsfolk and acquaintance.Luke 2:45  And when they found him not, they turned back again to Jerusalem, seeking him.Luke 2:46  And it came to pass, that after three days they found him in the temple, sitting in the midst of the doctors, both hearing them, and asking them questions.Luke 2:47  And all that heard him were astonished at his understanding and answers.Luke 2:48  And when they saw him, they were amazed: and his mother said unto him, Son, why hast thou thus dealt with us? behold, thy father and I have sought thee sorrowing.Luke 2:49  And he said unto them, How is it that ye sought me? wist ye not that I must be about my Father's business?Luke 2:50  And they understood not the saying which he spake unto them.Luke 2:51  And he went down with them, and came to Nazareth, and was subject unto them: but his mother kept all these sayings in her heart.Luke 2:52  And Jesus increased in wisdom and stature, and in favour with God and man.

Boy Jesus Teaching In The Temple at 12 years old 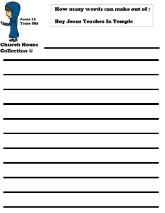 Word In A Word 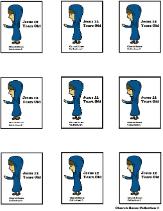 Use for stickers, cupcake toppers, popsicle puppets, tape to paper cups filled with snacks or drinks, laminate to make a game, or anything you can think of. 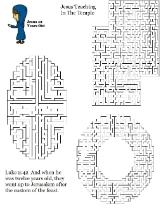 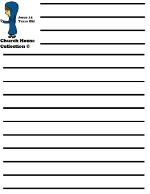 Boy Jesus Teaching in the Temple at 12 years old 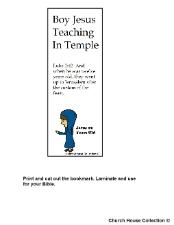 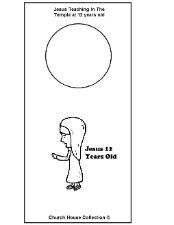 Print, color and cut out.